CPAs: We Are Not Nerds!


Some of my friends like to joke about how different we CPAs are from the typical nerdy accountants. However, generally, CPAs are pretty interesting, and, of course, smart guys! Thus, I’d like to share some funny facts that can prove CPAs and accounting professionals who are not nerds! 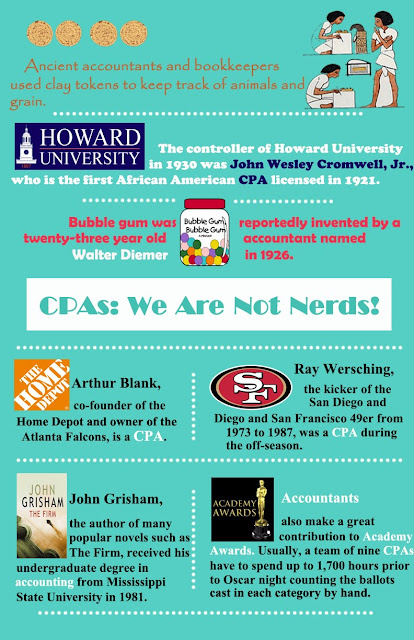 Ancient accountants and bookkeepers used clay tokens to keep track of animals and grain, and at that time, a standard numbering system has not been developed yet.

The first CPA exam was given by the State of New York in 1896.

The controller of Howard University in 1930 was John Wesley Cromwell, Jr., who is the first African American CPA licensed in 1921.

Bubble gum was reportedly invented by a twenty-three year old accountant named Walter Diemer in 1926. And he just tried to kill his spare time.

Arthur Blank, co-founder of the Home Depot and owner of the Atlanta Falcons, is a CPA.

Ray Wersching, the kicker of the San Diego and San Francisco 49er from 1973 to 1987, was a CPA during the off-season.

John Grisham, the author of many popular novels such as The Firm, received his undergraduate degree in accounting from Mississippi State University in 1981.

Accountants also make a great contribution to Academy Awards. Usually, a team of nine CPAs have to spend up to 1,700 hours prior to Oscar night counting the ballots cast in each category by hand.

Please feel free to contact with us for an initial free consultation. www.alanspencercpa.com